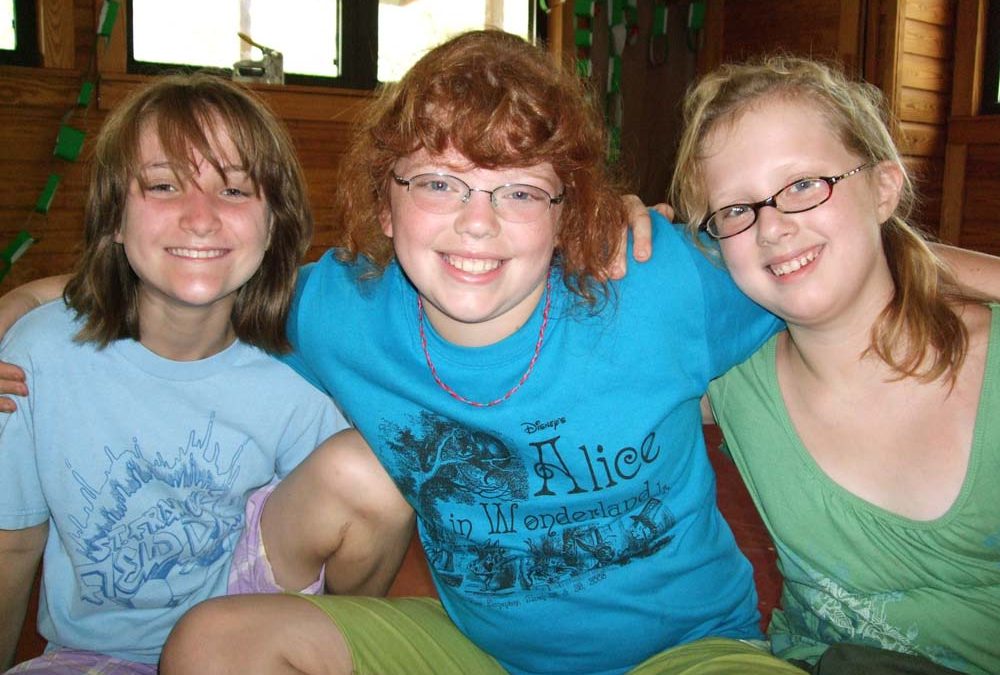 I would love to tell you about how Camp Brave Heart has helped me. My dad passed away in a car accident that I was in when I was 6. I did no counseling, therapy, etc.

until I was 11 and it started to show. I went to Camp Brave Heart honestly thinking it wouldn’t help. Then I got to camp. It was ok to cry, ask questions, tell people how you really felt. We did things that helped me break down what I was feeling. And there was nothing awkward when you said “My _____ passed.” because we all understood the feeling well enough in order to not make someone else feel it. At Camp Brave Heart I also made life time bonds with 4 friends that also lost their dads. We meet up on holidays, birthdays, any day we can really, and my little brother does the same with his friends he made at camp. Thank you for letting me tell you how Camp Brave Heart has helped me even now when I’m 14.

This letter was written by Madison, who attended Camp Brave Heart several years ago. She helped at registration Monday morning in Austin as a new crop of campers prepared to head off to Camp Brave Heart.  After registration, three chartered buses ferried the campers to Fort John Knox Ranch in Wimberley, where the campers stayed until Wednesday.

Registration is sometimes tough, especially for the younger campers who either have never been away from home before or who have suffered enough loss that any separation causes anxiety. It’s brave of the kids to go. It’s brave of their caregivers to let them go.

While most of the kids were looking forward to the days ahead, some of them were crying and clinging to their caregivers. Madison and her stepsister, Lyric, made it their business to put those kids at ease. They asked them to play cards. They talked to them about video games. They helped them make new friends. And always, Madison was able to share her experience.

There was one little boy named Lucky who was having a hard time. He told Madison that his father died. Madison said that her father died, too, when she was six. Lucky said, “Really? I thought I was the only kid who lost a dad when they were six!!”

Madison introduced Lucky to a little ball of energy named Mia. Mia asked him, “Do you want to be my buddy?” As the kids were walking out to the bus, Mia tugged on Madison’s hand and asked if they could wait for her buddy. When Lucky caught up, Mia said to him, “You’re my best friend at camp. Will you sit with me on the bus?”

“I was scared when I went to camp,” Madison recalled. “I didn’t know what to expect.  But

I still use the skills I learned at camp and I made friends who know what I’m going through. Our families get together on birthdays and every Thanksgiving and Christmas. They’re our families by choice.”

It didn’t take the kids long this year to forget their fears. As soon as the campers arrived at the camp near Wimberley, they split up into four age groups – 6-8, 9-10, 11-12, and 13-17 – and started to get to know one another.  These are the groups that they bunked with, ate with, played with and shared with. They spent the 2 ½ days at camp hiking, swimming and canoeing, of course, but also making memory boxes, designing a group quilt illustrating ways they cope, painting masks to show how they feel inside, and a host of other activities. They ended the camp with a memorial service honoring the loved ones they lost and received medals for their bravery.

They boarded the buses to return to Austin with new skills to cope with their loss. Best of all, they made new friends with others who understand exactly how they feel.

And who knows, some of those friends just might become their families by choice.

Hospice Austin is able to offer Camp Brave Heart free of charge to campers and their families thanks to the generous efforts of Big Hearts for Brave Hearts, Travis County Medical Alliance, and Chaparral Women’s Club.