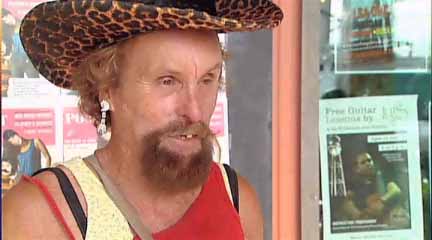 Though certainly the most famous, Leslie is not the first homeless patient we’ve cared for. In fact, there’s been many.  Our nurses, social workers, chaplains and CNAs have visited patients under bridges and at their camps. Sometimes patients agree to go to a nursing home or to Mary House, a wonderful home for chronically or terminally ill homeless. Sometimes they want to stay just where they are. Sometimes, like Leslie, they agree to go to Hospice Austin’s Christopher House.

We had a homeless patient once who traveled everywhere with his German Shepherd. When he checked into Hospice Austin’s Christopher House, the patient was almost frantic with worry about his dog, who was elderly and ill. The patient was afraid they’d be separated from each other. He was afraid his dog would die alone and scared.

That didn’t happen. They remained together, in the same room and in the same bed, until his pet was too ill to go on. At the patient’s request, a vet came out and put his pet to sleep. The dog died with his owner petting him and whispering words of love. The patient died peacefully the next day.

Leslie, too, had a peaceful end, surrounded by close friends and family. His sister, Alice, flew in from out of state and stayed with him 24 hours a day. His friends brought in a giant card, signed by friends he knew and friends he’d never met, and hung it on the wall. Leslie died in a safe place, surrounded by love.

At his sister’s request, the proceeds from Leslie Fest will go to benefit Hospice Austin’s Christopher House. She thought he would have wanted it that way.