Making life better for us all 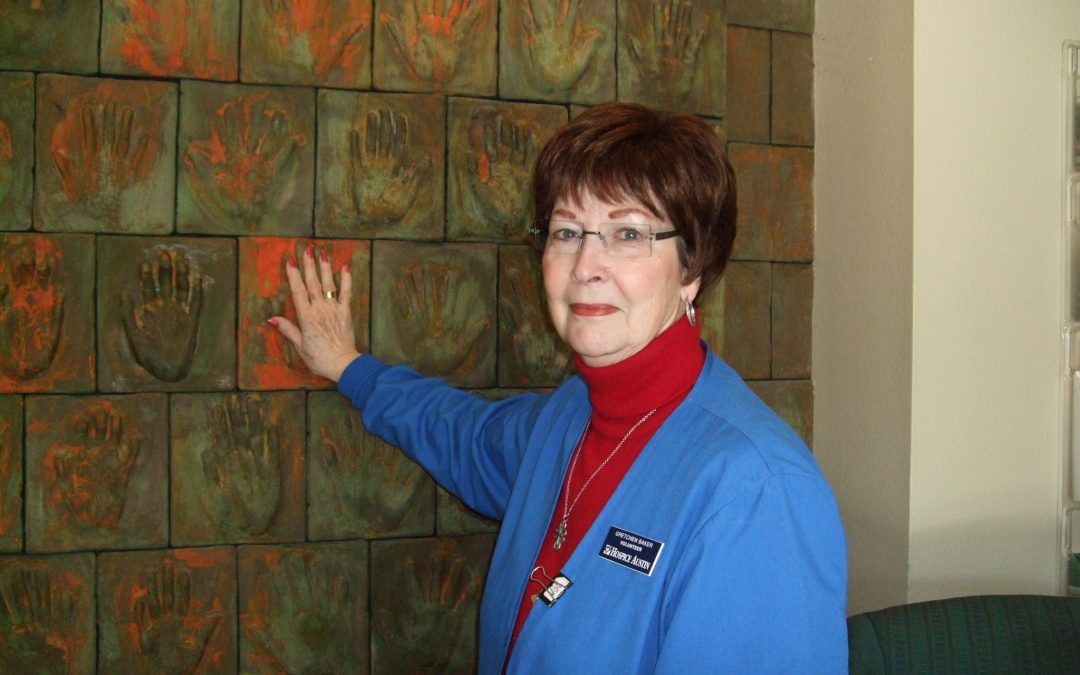 Hospice Austin’s Christopher House volunteer Gretchen Baker has turned heartache into a passion for helping others near the end of life. Not only does she volunteer at Christopher House twice a week, she’s provided a Thanksgiving Day meal for patients and staff for the past 10 years, organizes an annual Valentine stuffed animal drive, donates prayer shawls from her friends, and does countless other services that let our patients and families know she understands what they’re going through. She is truly a devoted, tireless volunteer. Best of all, if you ask for a hug, she’ll open her arms and hug the living daylights out of you. When she noticed recently that our holiday decorations were looking worn, she created seven beautiful wreaths for our halls. Thank you, Gretchen Baker, you make life better for all of us! Here is her story, in her words.

My introduction to Hospice Austin occurred in the late 1990’s when I attended the grand opening of Hospice Austin’s Christopher House, a wonderful 15-bed facility specializing in end-of-life care.  It never occurred to me that just two years later my husband, Bronson, would spend his final eight days of life there.

When I told the staff I was going to return as a volunteer, I found there is more to it than simply announcing my intention.  First, I would need to wait one year in order to go through the grieving process; then I would be interviewed; and finally, I would sign up for the next volunteer training class.  After the training, I was assigned to a home patient in order to gain experience (about 90 percent of Hospice Austin’s patients are cared for in their homes). Three homebound patients later, I received the telephone call I had been hoping for: I was offered a volunteer shift at Christopher House.  I have been volunteering there for 14 years now.

We’re touched by each and every one of our patients; however, there were two patients in particular who moved me deeply because of a strong personal connection.  The first patient was a handsome 20-year-old man who was blind, deaf and mute.  His whole world was one of touch.  His family couldn’t care for him and years earlier had given him up and eventually moved out of the area.  The day he died, I asked his nurse to let me know when he was close because I wanted to be with him so he wouldn’t die alone.  It was a privilege for me to be by his side, holding his hand when he died.  My daughter suffered brain damage at birth and was severely handicapped.  She was legally blind, mute and was bedridden by age 11.

The second patient was a baby boy who was born with multiple disabilities; he was the same age as my son when he died of SIDS.  Although the parents were very young, the mother was determined to be strong for her son saying there would be time for her to grieve after he passed away.  When his funeral ended, I hugged the mother and told her I was sorry for her loss.  She told me she was sure our babies are playing together in heaven.

Volunteers perform many different duties at Hospice Austin’s Christopher House that are too numerous to list.  Friends donate lap blankets for patients or donate crayons and coloring books or cans of soup.  Once a month I bake cookies or provide other treats for the staff.  Each Thanksgiving I cook dinner as my personal gift to the staff and visiting families.

As painful as it is to talk about the personal losses in my life, I am very passionate about Hospice Austin. This wonderful organization offers a variety of programs to those in need. The community’s support has allowed Hospice Austin to help so many people to be able to die with dignity and compassion over the years, including my husband, Bronson, and I have been

allowed to experience some very special moments — moments I wouldn’t change for the world.

It is a privilege for me to be a part of the Hospice Austin family and God willing, I hope to be volunteering at Christopher House for a long time.