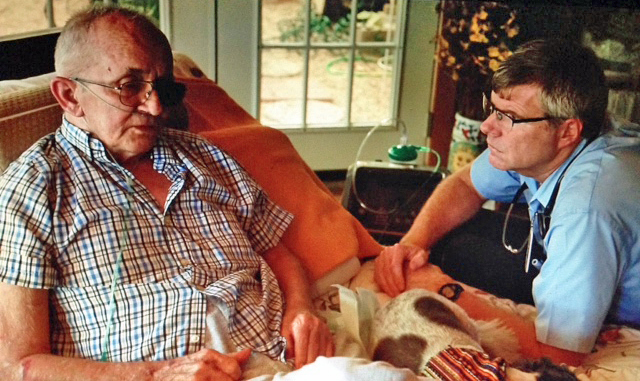 Three of the five nurses selected as finalists in the hospice category in the Austin American-Statesman’s Recognizing Nurses competition are from Hospice Austin. The public may vote online for a finalist once a day through May 1, then the top three finalists will be honored at the Recognizing Nurses Gala scheduled for October. We are reprinting Brian’s nomination here. We are proud of all of our nurses!

Brian King has served as an on-call nurse and as a nurse practitioner for Hospice Austin for over 20 years. In all that time he has been the gold standard for what outstanding, compassionate, comprehensive nursing care looks and feels like. In addition to being bright and kind, Brian is exceptionally skilled at what he does and has a gift for making people feel at ease and calm during what for most is a very anxious and uncertain time. He is thorough in preparing to meet each patient, reading through their medical chart completely; steady and patient as he talks and listens to them so that they feel seen and heard; encouraging and warm such that those he serves are able to relax and know that they are in good hands.

One example of this was when he cared for a friend of mine who had come on service, a woman in her early 70’s who was dying of ovarian cancer. In addition to physical pain and emotional grief, this woman was experiencing anxiety and shortness of breath that had become almost unbearable. The interventions of the RN Case Manager had not adequately addressed these symptoms and both the patient and the family were becoming increasingly worried and irritated with their care team. Fearing that this situation could snowball, the team leader deployed Brian King to go visit this woman and her family. I remember the patient’s daughter calling me and saying with annoyance, “You all aren’t even sending out a doctor. You’re sending a nurse practitioner!” Hoping to put her mind at ease, I assured her that Brian King was the very best there was. Sure enough, Brian arrived fully prepared; took all the time he needed to listen and address the shortness of breath issues, which in turn alleviated some of the attendant anxiety. By the time he left, both the patient and her worried family were able to take a much needed and appreciated deep breath. The patient’s husband (who went on to later become a valued Hospice Austin volunteer) called me later that day and, with a note of relief and humor in his voice, told me that after Brian left he looked at his wife and “saw another man in her eyes!” We both laughed about this, but I knew what he meant. Brian had arrived on the scene fully present, fully prepared, and fully capable and ready to help them solve this problem. Eventually this dear friend was able, in large part due to Brian’s care, to die as comfortably and with as much dignity as possible. A gift for this family and all who loved her.

A second example I would like to share involved a patient who suffered from serious mental illness. This patient lived in a rural part of our service area and would walk up and down the road in front of his home where he lived with a family member all day long, day after day after day. He hadn’t taken off his shoes and socks in three years. The caregiver was, understandably, quite concerned about the state of this patient’s feet and expressed that concern on one of Brian’s visits, noting that new socks and shoes had been purchased, but that the patient would not allow the caregiver to help in any way, nor would the patient take off his shoes and socks. The next week Brian brought a basin and a heavy duty set of tools for filing and clipping toenails and cleaning up feet. In his gentle, kind, unhurried way, Brian coaxed this patient to allow him to remove the old, worn out shoes and socks. The socks had to be carefully peeled off in strips. Brian proceeded to repeatedly soak and clean this patient’s feet; to file down and trim the overgrown nails which were causing pain and injury; and to help him into a brand new pair of socks. Brian told me that when the patient pulled on the new socks over his freshly cleaned feet the most radiant smile lit up this patient’s face.

These are only two of hundreds of examples of the exquisite, personalized, attentive care Brian King provides to each and every patient he serves and has faithfully served for almost 20 years. Brian is humble and always seeking to learn more and to become more skilled as a nurse practitioner with Hospice Austin. He practices not only the science but also the art of medicine. He is truly a treasure in our organization and in this community and I can think of no other individual who deserves this recognition more than he does.