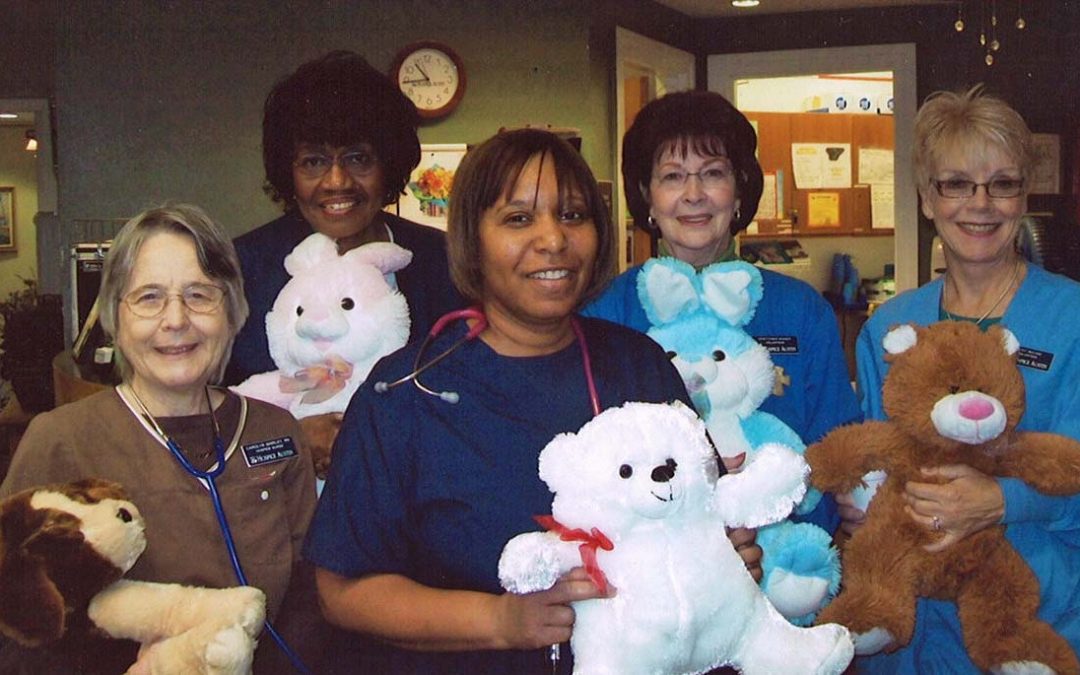 Every February when people all over the country are preparing to celebrate Valentine’s Day by buying candy or flowers, giving gifts or taking a loved one to dinner – all in the name of St. Valentine – my thoughts turn to leading an outreach drive to collect teddy bears to donate to Hospice Austin’s Christopher House. The teddy bears are given to patients experiencing anxiety and agitation to comfort them.

When I was in elementary school, Valentine’s Day was a very special day. Walking to a one room schoolhouse in the country that housed grades 1-8, I couldn’t wait for the school bell to ring to signal the start of the school day. The students placed their valentines in a big box wrapped in decorative paper and we waited patiently until the teacher said it was time

to remove each one from the box and give it to the one whose name appeared on the valentine. For years, I saved those valentines and I looked at them often until they became so ragged from being handled it was impossible to keep them any longer.

Cupid is a 3,000 year old baby with wings who shoots love tipped arrows into unsuspecting people. It was the Romans who called him Cupid – a 3,000 year old god wearing a diaper. The Greeks called him Eros and the story claims that he was so handsome he could make one go weak in the knees.

When people started sending valentines in the 1700’s, the baby Cupid image stuck and it reminds us that love comes in all shapes and sizes. So do the adorable teddy bears that have been donated to Hospice Austin’s Christopher House patients. These soft, cuddly bears play a very important role in providing comfort to the terminally ill patients as they wrap their arms around their special “friends.”

This year, Gretchen Baker and her loving family and friends celebrated St. Valentine’s Day in a very special way by opening their hearts and donating 229 teddy bears to the patients at Hospice Austin’s Christopher House. Thanks to Gretchen’s efforts, 700 teddy bears have been donated since 2008.