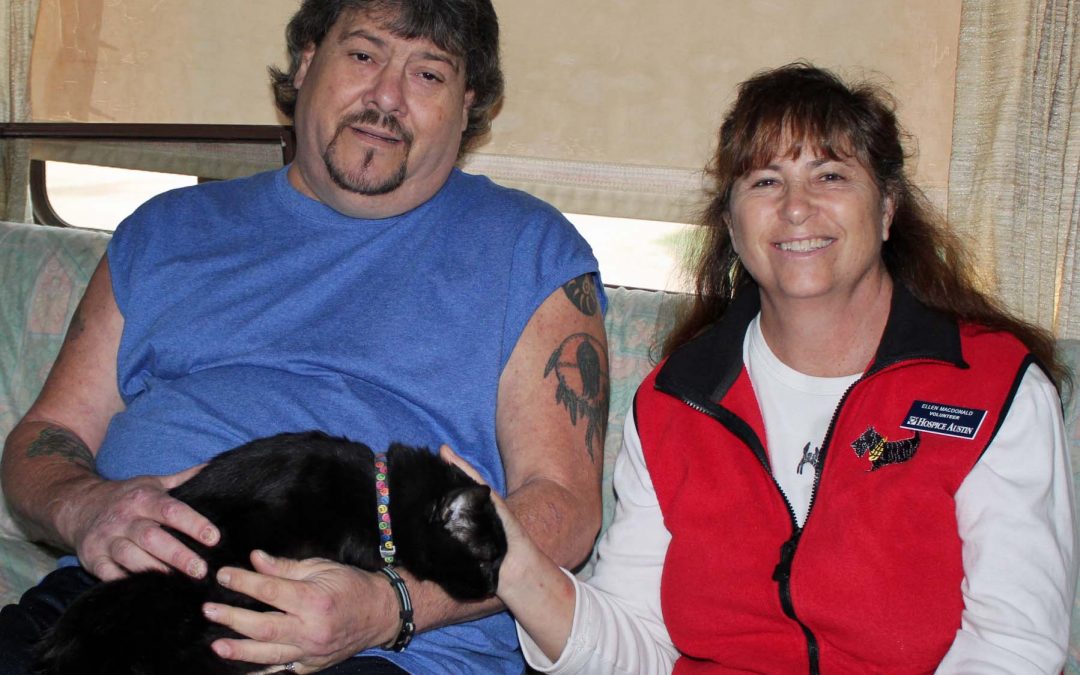 Just so you won’t worry, this story has a happy ending. It starts off sad, because Curtis, a 50-year-old Hospice Austin patient, had lost his cat, Steve, and normally lost cat stories don’t end well.  You may remember Curtis from a previous Season of Caring Campaign in the Austin-American Statesman. He was sponsored by Hospice Austin and given a trailer to live in. Last week, Curtis was in the process of moving his trailer to a different trailer park. Since I am a volunteer for Hospice Austin’s Pet Peace of Mind Program, I had driven over a week earlier to deliver a cat carrier to transport Steve to the new park.

On moving day, a couple of Hospice Austin volunteers had arrived with their truck to tow Curtis’ trailer to its new home; Curtis’ regular volunteer, Pete, was also there to help. The move was going smoothly until Steve decided to bust out of the carrier and bolt off through the parked trailers. There’s only about a gazillion perfect cat-sized places to hide.  Curtis and the other volunteers tried to find him, but eventually had to give up. Since Curtis doesn’t have a car, he couldn’t drive back to the old park to look for Steve.

The next day the news was relayed to the Pet Peace of Mind Coordinator who immediately contacted me to see if I would be willing to search for Steve. Well, within two minutes of receiving the email I was in my car with my 15-year old son, who has just gotten his learner’s permit. We interviewed neighbors and scoured the area. No Steve to be seen.
The next morning I picked Curtis up from the new trailer park and we went back to search, this time with missing-cat posters, tacks, and tape. We walked every square inch of that park. It was not looking good.  Every once in a while Curtis would stop and close his eyes and take a

few long deep breaths. I could see he was making an effort to calm himself down.

We decided to drive over to the adjacent apartment complex to put up some of our lost-cat posters. Back at the car near his old trailer parking spot Curtis thought he heard a muffled meow and sat down next to his neighbor’s deck.  After 10 minutes of calling, a small black head suddenly appeared. Steve!

After their reunion, we managed to get Steve into a new, stronger carrier. Then Curtis opened his arms to give me a huge crushing bear hug that was wonderful. We were both ready to cry we were so relieved and happy. I knew that if we had not found Steve I would have been driving over to that park every single day probably for weeks to keep looking. We drove back to the new park and installed Steve in his old home where he immediately began weaving in and out of our legs and purring like a lawnmower. We celebrated their reunion with a can of tuna fish. It was a good day.  And I went home on a “cat high” that lasted all weekend long.

I am so grateful for the Pet Peace of Mind Program. Without this resource, Curtis would be heartbroken and lonely and Steve would be, well, never having tuna fish again. There are a lot of us animal lovers who volunteer at Hospice Austin but without this special program we would not get connected to people like Curtis who need us to help them with their pet problems.

And since we all need to be needed, everyone wins!