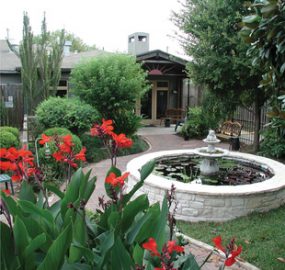 When Hospice Austin Executive Director Marjorie Mulanax toured Christopher House in 1993 after it opened as a small AIDS hospital, she was dazzled. “Oh my gosh,” she remembers thinking, “They’ve done what we need to do!” Hospice Austin needed an in-patient facility, but Marjorie didn’t see how it would be financially possible.

Five years later, AIDS was an illness that could be managed at home; Christopher House was nearly empty and put up for sale. Marjorie still didn’t know how it would be financially feasible but she knew an inpatient facility was badly needed. Hospice Austin launched a capital campaign and, thanks to our generous community, raised $1 million within three months, enough to purchase the building and all its contents.

Since its opening, thousands of patients and their families have been cared for at Hospice Austin’s Christopher House. One of those family members is Mary Mikan, whose 58-year-old mother died at Christopher House five years ago. She had been diagnosed with brain cancer just 40 days before.

“My parents were my miracles,” Mary said. “They were everything to me. They adopted me out of the foster care system when I was four years old. They were told I had a learning disability and would never finish school. But they took a chance, and their love healed me.”

Mary remembers one day at Christopher House when she and her family had gathered at a big table in the dining room to eat a meal. As she was sitting with her plate of food, she became overcome with grief and began to cry. Her mother’s nurse happened by, touched her shoulder and told her to go lay with her mom and not worry about her plate.

“I didn’t even know how badly I needed someone to tell me it was okay to be sad, angry, lost, and confused,” Mary said. “Those quiet moments that I was able to have with my mom are the most treasured in my mind. I am forever grateful to Hospice Austin, and hold a special place in my heart for
Hospice Austin’s Christopher House.”

After Mary’s mother died, the nurse asked if the family could step out of the room for a minute. When they were invited back in, the nurse had combed her mother’s hair, smoothed the blanket, and put a rose in her hand. Mary said that thoughtfullness transformed what could have been a scary time into a peaceful one.

After her experience, Mary was determined to work at Hospice Austin. She got a job working as Marjorie’s executive assistant three years ago. “I love Hospice Austin for what they did for my mom,” Mary said, “and my love just continues to grow.”

Hospice Austin’s Christopher House itself is a labor of love. It doesn’t make money — that’s why most hospices don’t operate in-patient units — because the facility must be staffed, regardless of current patient census. It could be near empty of patients in the morning and full in the afternoon. It has to be ready for patients whose symptoms need controlling. Once a patient is comfortable, there’s room for reunions, for togetherness, for carving out those quiet moments of grace.

Camden employees, who spent the day volunteering at Hospice Austin’s Christopher House, at the Wall of Hands art installation

Just inside the front doors, visitors are greeted by a wall of hands. The artwork was commissioned by the family member of an AIDS patient, because touching is so important, especially to people who are suffering.

“Hospice Austin’s Christopher House belongs to the community,” Marjorie said. “From the volunteers who donate their time, to the supporters who donate their funds, to the patients and loved ones who come seeking help — it’s all about touch, in one form or another. The community is ensuring that no one dies alone, and that’s a beautiful thing.”