Being Brave: The Courage to Begin 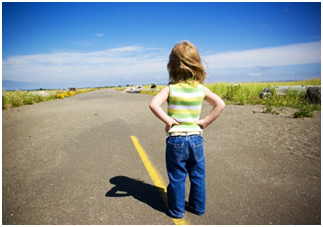 When I let go of what I am

It was my favorite kind of Central Texas evening.  Early April, the oppressive summer heat hadn’t yet descended upon us and the air was warm, the breeze gentle.  It was just right for shorts and bare feet. The kind of evening that invites a slowing down, a deeper breath.  I stepped out onto my mom’s front porch to listen to the mockingbirds sing, wiggle my toes in the cool, green grass and reflect upon the life-changing adventure Bill and I were about to embark upon.  Newlyweds, we had recently quit our jobs, sold or stored all our belongings, moved from Louisiana to my mom’s home in Austin, and purchased back packs and mountain bikes.  Our intention was to travel around the world.  And in only a few days time we would begin.   A few months before, we had decided to bicycle from Austin to Mexico.  From there we would transport our bikes through Mexico on buses and trains, and then bike Belize.  After Belize we would decide what to do with the bikes.

Now, it is important for you to know that, although I know how to ride a bike, I am definitely not a cyclist.  In fact, “outdoorsy” isn’t an adjective that anyone would ever use for me.  But my heart had been captured by someone who loves the outdoors and who believes in seeing life up close.  And so when he suggested beginning our trip on bicycles, I readily agreed.  How hard could it be, right?!?  On the inside, however, I was more than a little nervous.

And so there I sat, enjoying the evening and wondering what the next few weeks and months would bring.  After a few minutes alone, the front door opened and my mother came out onto the porch with me.  It was no secret that mom had misgivings about our trip in general and the bike riding part in particular.  So I wasn’t surprised when she turned towards me with a look that indicated she had something to say.  Cocking her head to one side and raising her eyebrows she said, You know, I’ve raised you to be a house plant.  It will be interesting to see how you do out there in this big old world.

I smiled to myself.  She was right.  I HAD been raised to be a house plant, like one of those poinsettias in its little green, plastic pot covered with shiny paper.  There was just no telling how I would do away from the confines of that safe, predictable container.  But I knew that, no matter what, I had to find out for myself.

Starting out on those bicycles was one of the scariest things I have ever done.  But somewhere I had heard that there aren’t really brave people.  Rather, there are people who do the things that scare them and people who allow fear to keep them from doing things.  I knew I wanted to become someone who conquered her fears.  And so I took a deep breath, put on my lime green bike pants with tiger stripes (because, in my experience, fun clothes definitely help), strapped on my new helmet, and “saddled up,” ready for wherever the road would take us.  And with every mile traveled and every fear pushed through, this little potted plant grew into something she had never before imagined.

Sometimes bravery can mean doing something life-changing.  Other times it can be something as simple as making a doctor’s appointment, beginning a project you’ve been putting off, or speaking up.  Bravery for you may mean telling someone how much they mean to you or loving yourself just as you are.   Whatever it is, bravery always means showing up for your life.  Diving in.  Getting wet.  Taking risks.  Bravery is in the baby steps, the giant leaps, and everything in between.   Sometimes the bravest thing of all is simply to begin.