Being Brave: The Courage to Fail 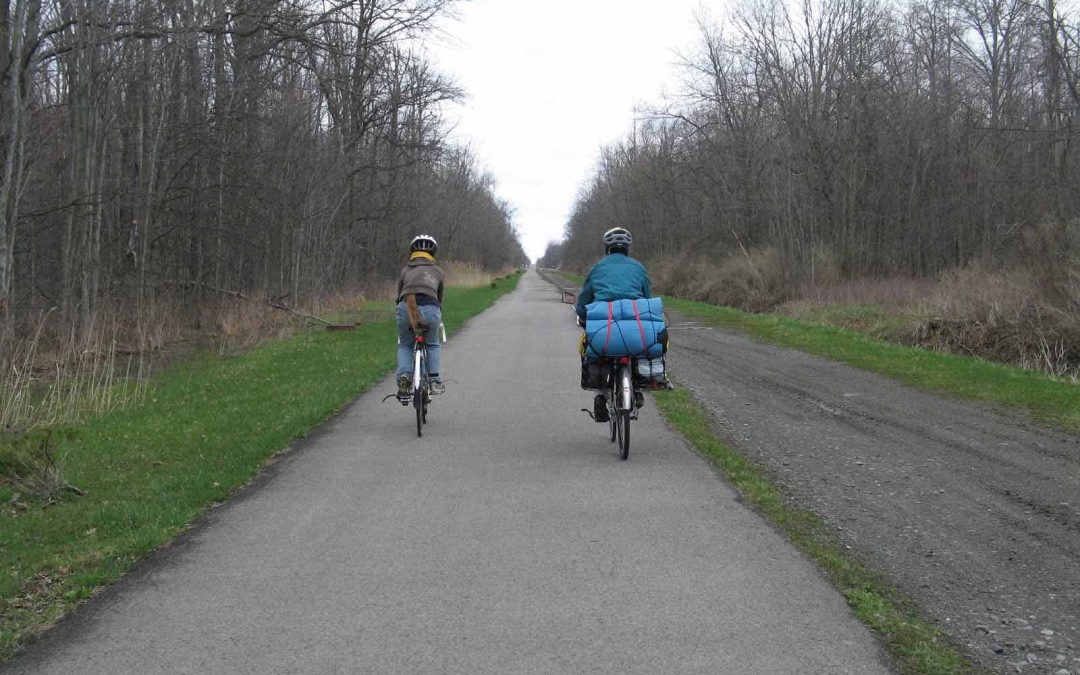 The day had arrived that we had anticipated for so long.  We loaded our new canary yellow Fisher mountain bikes in the back of a borrowed pickup truck and mom drove us to the outskirts of Austin. She parked under a shade tree in front of a little country church and waited with us while Bill and I (but mostly Bill) began the arduous task of loading our back packs and pannier bags onto the bikes.  Mom and I made nervous conversation and I chewed on my cuticles.

Eager for this adventure, Bill had quit his job several months before.  He then proceeded to pour over catalogues tailored to outdoor enthusiasts.  In his excitement he ordered stuff.  Lots of stuff.  For several months every day was like Christmas, with packages arriving at our door. By the time we were ready to leave we had some amazing gear. In addition to what you might expect, a tent, sleeping bags and pads, flashlights, and pocket knives, we also had  a portable CD player with mini-speakers and a nice assortment of CD’s, a full rack of mountain climbing gear, a solar heated outdoor shower bag, a water purifier, and a custom-made fold up bow and arrow set.  We were ready for anything.  The first hiccup came when we had to fit it all into or onto our packs.  The second arrived when we tried to secure the packs onto our bicycles.  It takes engineering, strong rope, and determination to make something heavy and wide stay put onto something thin and light and we had yet to perfect the process.  We couldn’t postpone our launch any longer, however, and so there we were on that sunny April afternoon under a shade tree in Webberville sweating and straining to make it work.  Bill’s bike was so heavy that I was barely able to hold it upright with both of my feet on the ground.   After watching us for a little over an hour, my mother couldn’t take any more.  She said her goodbyes and drove away.  Watching her leave I swallowed a lump in my throat.  After all, I had known her all my life.  I had only known this frustrated, perspiring man wearing lycra shorts for a mere year and a half.

Finally we were ready to go.  Thankfully, my bike was a little lighter than Bill’s and I found that I could peddle without wobbling too much as long as I held on tight and didn’t move my body at all.   Gradually, however, with the sun on my shoulders and the breeze on my face, I began to loosen up.  It still took everything I had to move in a straight line, but now I was noticing the picturesque farms against the backdrop of a cerulean sky.  Ok, I thought to myself, this isn’t so bad.  We can do this!

A mile or so down the road Bill pulled up alongside me.  Just to our right was a slope of thick, silky, green grass leading down to a pasture dotted with cattle lazily chewing their cud.  The incline, combined with the weight of his bike, began pulling Bill down the hill toward the cows and away from the road even though he was pedaling furiously.

Nah, he replied, you go on ahead.   I’ll catch up with you in a minute.

Ok!  I said, secretly relieved not to have to stop since getting started was the hardest part.

I pedaled onward for about 15 minutes, enjoying the ride and the solitude…wait, the solitude?!  Where was Bill?  He should have definitely caught up with me by now.  I slowed down and cautiously looked over one shoulder, wobbling wildly as I did.  No Bill.  I stopped and waited. Still no Bill.  I called his name.  Nothing.  A feeling of dread washed over me.  Was this a test?  Should I have stopped even though he told me not to?  Could he have had a heart attack and died back there in that ditch?  Were the buzzards even now circling his body?  I turned my bike around and began to back-track slowly, scanning the horizon for the sight of him.  Finally there he was, very much alive and swearing up a storm, at the bottom of the slope where I had last seen him, the contents of his back pack scattered across the grass.

We had to start all over packing up his bike and by the time we finished the sun was beginning to set.  We rode a little farther and made camp in a nearby field.  As we settled in for the night we calculated that our total distance for our first day was…two miles.   Not what you would call a good start.

The next day we made it the 20 miles to Bastrop State Park.  I used a pay phone to call Mom and she accepted our invitation for a weenie roast that evening.  And while she was there we sheepishly packed about 40 pounds of really amazing gear into the trunk of her car.  Maybe we could live without the bow and arrow, climbing gear, and a few other odds and ends after all.

When things don’t go as planned it can be mildly frustrating, completely humiliating, or deeply discouraging.  Benjamin Franklin once said:  I didn’t fail the test.  I just found 100 ways to do it wrong.  So, perhaps failure is simply part of the process of getting it right and not actually failure after all.  Maybe what we call failure is simply learning what not to do.  And when we learn from our mistakes we are one step closer to where we want to be.