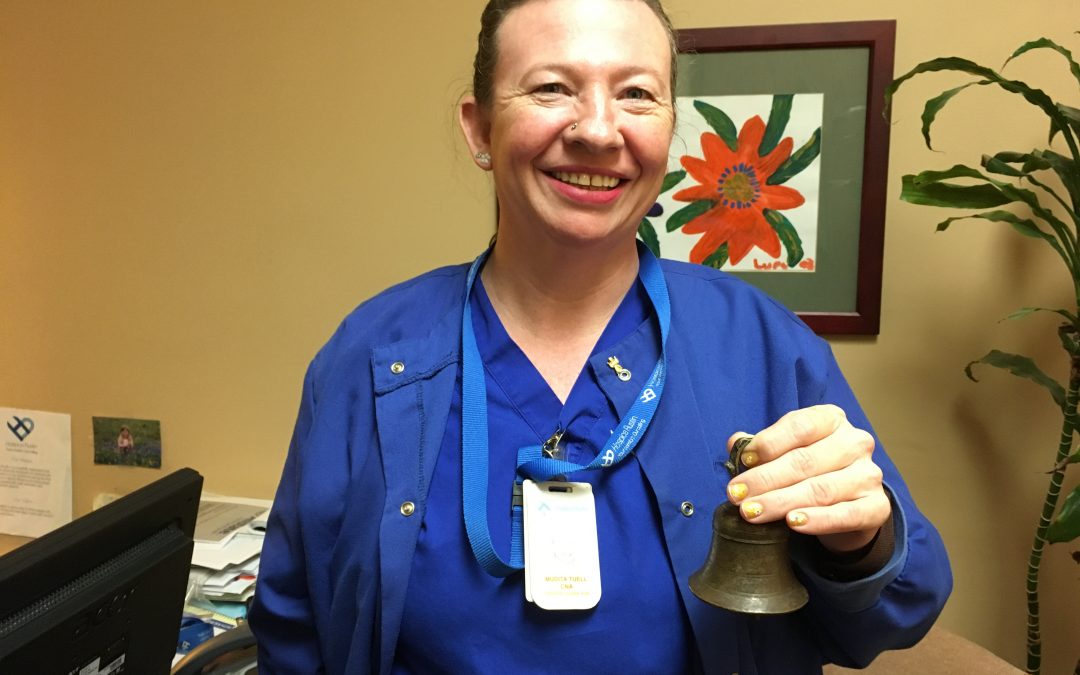 Mudita Tuell holds a temple bell given to her by a priest from the Maratika Monastery in Nepal.

When Hospice Austin Certified Nurse Aide Mudita Tuell cares for a patient, she takes her time. Her touch is gentle, her movements careful and measured, and her voice is soothing. Even if a patient is in a coma, she tells the patient exactly what she is going to do before she does it.

Practicing loving kindness is a way of life for Mudita. Born in northern India to an Italian mother and an American father, she was raised Buddhist in a Tibetan village. Buddhist children are taught that you can die any day; that’s why it’s so important to be good to others. Like most children, however, she never thought it would happen to her family. That changed when she was nine – her seven-year-old brother contracted rabies and died after being licked by a dog.

After the priest told her mother not to bring Mudita to school anymore because she was too sad, she and her mother moved to Nepal where they lived before moving to Italy and then to the U.S. Eventually her mother became ill with cancer and Mudita helped care for her. Towards the end, her mother would tell her, “I’m so tired of suffering. I’m ready to die.”

The desire to alleviate that kind of suffering is what ultimately led Mudita to work at Hospice Austin. “It’s hard to see people decline and die, but I learned to be strong for them,” she said. “I have the courage to see a sick person and clean their whole body. I like that I can help make their day better.

“Working at Hospice Austin is a calling for me,” she continued. “In Buddhist belief, they say that you shouldn’t waste your human life. You should show kindness, love and compassion and help others. So thank you, Hospice Austin, for giving me my purpose in life!”